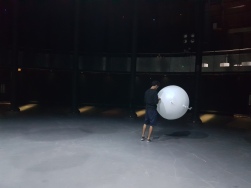 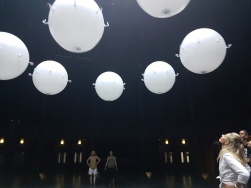 Can’t believe his gig was almost two years ago. One of a scarse amount that actually do some things to you…

END_OF_DOCUMENT_TOKEN_TO_BE_REPLACED

In March 2015 British Film Institute in collaboration with Electra and Mutek presented Digital Quèbec: a couple of nights with province’s most innovative and experimental A/V creators(line-up)

I got myself in for the last performance that comprised two artists.

Myriam Bleau presented her Soft Revolvers: 4 spinning tops built with clear acrylic, each associated with an ‘instrument’ of some sorts. The tops were equipped with gyroscopes and accelerometers that communicated wirelessly with a computer where the motion data collected (speed, unsteadiness at the end of a spin, acceleration spikes in case of collisions) informed musical algorithms designed in Pure Data. LEDs placed inside the tops illuminate the body of the objects in a precise counterpoint to the music.The positioning of the lights created visually stunning halos around the tops, enhanced by POV effects (persistence of vision). A camera placed above the performance table provided video feed that was subtly manipulated and projected back on the screen behind the artist, making the projections an integral part of the performance.
myriambleu.com

Le Révélateur (visual artist Sabrina Ratté and electronic music producer Roger Tellier Craig) merged visuals together with a multitude of hybrid sonic textures , the effect being tracks that buzz and hum in glitched-out cacophony, while others incorporate warped sonic bodies through use of Analogue Solutions’ Telemark synth.
RTC:”I was completely obsessed with the development of early computer music and electronic music in the 70s and 80s and, coincidentally Sabrina was also immersed in the history of electronically generated images from that era [..] We were both very interested in the combination of electronic sound and imagery [..] I feel like we finally managed to zero in on this kind of impossible/virtual reality aesthetic we were going for over the past couple of years, and the artwork for Extreme Events,  as well as the video for Aftermath Selves  really depicts this.
SR: “We’ve been exploring different techniques as well, and one of them was to connect both our modulars together in order to achieve sirect synchronisation between the music and the image. But this is only one aspect of the performance, and it gets mixed with many other images that are not sync by wires or anything. It;s important for me to keep a certain amount of spontaneity in a persotmance, because that’s when interesting accidents have a change to happen”

Info about Lighting:
UK – Manchester- based dbn Lighting are supplied an integrated lighting and visual design plus equipment – including lighting and LED screens – to The Warehouse Project (WHP).
dbn’s Pete Robinson created the production and lighting design for all three rooms in the space.
there is a strip of dbn’s 12.5 mm LED screen 13m wide by 2m deep at the back of the stage flanked either side of the PA wings at front truss level by two vertical LED drops at 1 metre and half a metre wide by 2m deep.
Several panels of LED are mounted on the front truss facing into the audience, and the visual surfaces are completed with a versatile 10 metre wide by one metre deep strip of LED – divided into four sections each mounted on wheeled tank traps – which can be placed onstage in different configurations according to the band or DJ set up.
dbn supplies all the processing, scaling and switching, while the video content for each week is supplied by a third party and/or the performing artists.
The idea is that the LED screen design will work on different perspectives whether you are standing right close up to the stage or right down the far end of the room – there will always be some eye-catching visuals in view.

A low key event with good acoustics and amazing hidden visuals/lighting play if you looked up to the the ceiling. Spotted them when I lied back flat on the floor. People circled around the stage which was located just below the Roundhouse dome trying to catch a glimpse of the artists. Initially I tried to sit on some elevated platform but was moved by the security. Sometimes it’s good to be right at the back behind the crowd with the vision of the musicians obstructed it turns out. Big thanks to the lighting guys, made the sonic experience hypnotising and truly unique. Captured with a crap mobile camera so it doesn’t make the show justice of course.

All the below artists together on stage in a Queen Elizabeth Hall’s auditorium made for a really special musical and spiritual experience. A fusion of Israeli, Indian and Pakistani vibes with the guitar/organ touch from Jonny Greenwood.

Following their premiere performance at Sadler’s Wells on Wednesday 16 April, the NYDC performs in this informal and intimate setting.

Rather than seeing the work with full theatrical staging, this is a chance for audience members to witness the passion and force of the pieces up close.

It features music composed by Vincenzo Lamagna and performed live by musicians from the National Youth Orchestra of Great Britain.

Khan is one of the most celebrated and respected dance artists today. In just over a decade he has created a body of work that has contributed significantly to the arts in the UK and abroad.

His reputation has been built on the success of imaginative, highly accessible and relevant productions; this new commission sees Khan bring a wealth of experience to his pivotal role in working with this vibrant company of young artists drawn from NYDC workshops across England.